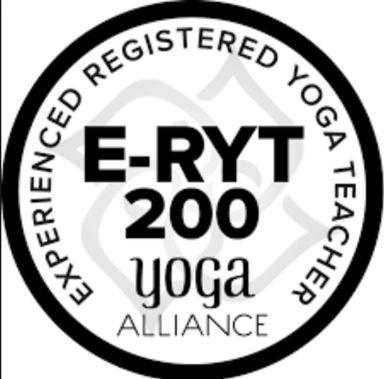 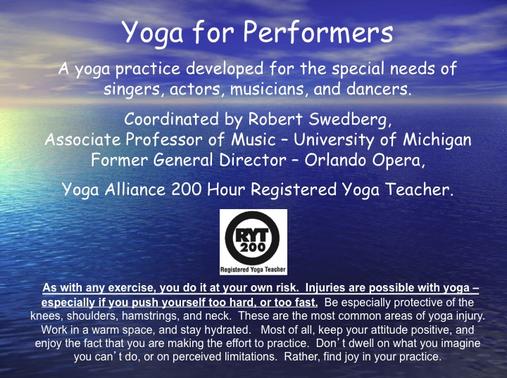 Yoga For Performers grew out of regular yoga practice at Orlando Opera.  General Director, Robert Swedberg, began to offer an experimental practice to company Resident and Studio Artists in 2003 as an outgrowth of regular work that he had done over the past 30 years in developing musical and dramatic skills with singing-actors.  The Orlando Opera staff began to join in, as did guest artists and other interested performers from the community.  Word of the practice spread (performers' social networking is a remarkable thing) and Robert was asked to offer the practice at the first Classical Singer Conference in Hartford, Connecticut in 2004, and again in New York City in 2005, Philadelphia in 2006, and San Francisco in 2007.  The practice has also been offered at the Opera America National Conferences 2004 - 2007, National Opera Association Conferences 2008-2014, and the National Association of Teacher of Singing (NATS) National Conference in 2012.   In 2008, Yoga For Performers was added to the curriculum for the School of Music, Theatre and Dance at the University of Michigan, where Swedberg was Associate Professor of Music (Opera Director),  and offered Yoga for Performers to more than 90 participants in student and faculty classes each semester until his retirement in 2018.

This approach to yoga focuses on developing pranayama (Sanskrit for control of life-force, or breath) through those asanas (fluid postures) that foster the greatest expansion and flexibility for the parts of the body performers use most (thoracic region and support mechanism, face, and limbs), while avoiding some yoga asanas that might at first be too challenging or potentially compromising for performers.  For example, postures that may not be initially practical for larger bodies, or that may unnecessarily put the cervical spine, neck muscles, and critical musculature surrounding the vocal folds in jeopardy, are not a part of this practice.  Once a performer is familiar with yoga, more advanced postures can then be incorporated.

Why Yoga for Performers?

Many people who have not experienced yoga have an image of super-flexible (usually skinny) people sitting in lotus position in some state of relaxed meditation.  Yoga can certainly lead to greater flexibility and relaxation, but it offers so much more than that.  Those who practice regularly find yoga also builds stamina, better balance, easier coordination, a stronger immune system, and better weight control.   These are all attributes that are of the utmost importance to performers.  Yoga practice can be slow, relaxed, docile; fast, aerobic and hot; or some variation of all of these.  It is a very practical exercise system, since you can take it anywhere with you and practice whenever you have a chance.  In fact, a yoga frame of mind that extends through-out your day is one of the goals of yoga practice.  It requires no special equipment or clothing, and once a practice is developed by working with instruction, it doesn't have to cost anything.

How to approach your practice

Performers tend to be very competitive people.  Training the technical side of the performer is usually an intense endeavor with methods, exercises, etudes, vocalizes, and texts to guide in development of highly complex, disciplined, left-brained activity.  It is important to let all of that go as you experience yoga.   If you bend over to touch your toes and find you don't go very far at first, there is no need for concern.  If you take several deep breaths into a slow stretch in that direction (after warming up) and reach your "edge," you will derive the same benefit that a more experienced yogi or yogina finds if her "edge" allows her to take her hands flat to the floor.   Yoga is not a competitive sport, and as it is an individual practice, there is no need for comparison of one pose or another with poses of anyone else.  Thus, no one is "good at yoga" or "bad at yoga."  The pretzel poses that we may see on the covers of yoga magazines are interesting and admirable, but are really of no consequence in the whole scheme of things.   Enlightened yogis actually find it counterproductive to "show off," as truly healthy yoga practice is more about the breath in a pose than the pose itself.  That is why yoga practice is ideal for performers, as our art is based on extraordinary development of breath.  One merely spends time (ideally measured in breaths rather than minutes) enjoying the benefits of calming the mind, expanding the spirit, and purposefully becoming more aware of the body.​